DIY BIO: clone at home but kill them later

Cloning the gene for green fluorescent protein is fun. Lots of fun. Cloners have put the GFP gene into rabbits, plants, cats, fish, and worms, and made mutants that code for proteins in every color of the fluorescent rainbow. Teachers like GFP so much that every year, high school students throughout the U. ... END_OF_DOCUMENT_TOKEN_TO_BE_REPLACED
Filed under:
cloning
DIY biology
DIY science
GFP
home cloning
transformation

What kind of dead animals are in your freezer? I used to be skeptical about the whole notion of cloning wooly mammoths. But this recent article in PNAS (1), makes the whole idea seem less far fetched. 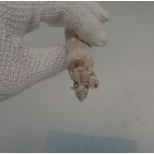 Wakayamaa et. al. describe an amazing technical advance where scientists in Japan were able to derive clones from mice that had been frozen for 16 years at -20Â°C. I'm guessing ... END_OF_DOCUMENT_TOKEN_TO_BE_REPLACED
Filed under:
cloning

Another cat that glows in the dark

I've heard that all cats are grey in the dark, but I guess that's no longer true in New Orleans. Scientists at the Audubon Center for Research of Endangered Species have made a cloned kitty that glows lime green. Some of you already know my fascination with glowing fish, fluorescent cats, and cloned ... END_OF_DOCUMENT_TOKEN_TO_BE_REPLACED
Filed under:
cloning
GFP
Mr. Green Genes
vaccine

The five little Boogers and how they grew

Leave it to those wacky Korean cloners. In December 2008, scientists from Gyeongsang National University gave us fluorescent kitties. Now, we have cute little puppies! These aren't the first cloned pets on the market, we have stores that sell glowing fish. But these clones have a bit higher price tag. For $50,000 Bernann McKinney got 5 new "Boogers" from RNL Bio; "Booger McKinney," "Booger Lee," "Booger Ra," "Booger Hong and "Booger Park." That's $10,000 a Booger! Still, who can resist these cute little boogers?

I don't have a picture of the puppies anymore, but they were ... END_OF_DOCUMENT_TOKEN_TO_BE_REPLACED

How much is that doggy in the window?

Pet cloning is back!

Some owners find their pets to be closer than some human friends, other owners never really bond with their pets at all. BioArts, a California biotech company, founded by ex-CEO of the now defunct Genetic Savings & Clone, is counting on the ... END_OF_DOCUMENT_TOKEN_TO_BE_REPLACED

Korean scientists clone cats that glow in the dark! 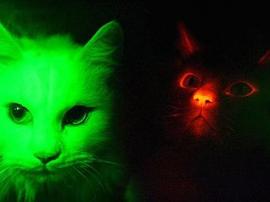 When Genetic Savings and Clone shut their doors it looked like wishful cat owners were going to be out of luck and short of kittens.
... END_OF_DOCUMENT_TOKEN_TO_BE_REPLACED
Filed under:
cats
cloning
fluorescent
glow in the dark