We'll have a blast, I promise! But there's one little thing we need to discuss first...

I want to explain why I'm going to use nucleotide sequences for the blast search. (I used protein the other day). It's not just because someone told me too, there is a solid rational reason for this.

The reason is the redundancy in the genetic code.

Okay, that probably didn't make any sense to those of you who didn't already know the answer. Here it is.

The picture above shows the human genetic code (there are at least 16 variations on this, but that's another story). Each middle cell in the table shows the codons. Those are the groups of three bases in the left most column. Then, reading from left to right, we have the three letter and one letter abbreviations for the amino acids they encode. In every case, except for tryptophan (W), an amino acid can be encoded by multiple codons. (That's what we mean when we say the code is redundant. Oops, I said it again!)

Well, this means that we can have the same amino acid in a protein, but different codons in the mRNA.

Thus, you can see more variation at the level of the nucleotides.

One other thing, you might be wondering why there are T's in these sequences when the virus is made of RNA.  Well, one reason is we usually make a DNA copy of RNA before we do any sequencing.  The other reason, is that we store almost all sequences in the form of a DNA sequence, even when the sequences really did come from RNA. 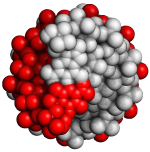