In 2007, Genome Technology reported the cost of sequencing Venter's genome was $70 million. Watson's genome at only $2 million, was a bargain.

Why was Watson's genome so cheap?

Even though the Venter and Watson genomes were both published in 2007, the price of the two genomes was substantially different. The biggest reason for the difference was the technology. Where Venter's genome was sequenced with Sanger dideoxy sequencing, the gold standard technology of the day; Watson's genome was sequenced with the first of the Next Generation Sequencing instruments, the 454 (now owned by Roche).

Where are we now?

Today, the price has dropped still further. CoFactor Genomics will sequence a human genome (at 1.6X coverage) for $22,900. Knome is putting a human genome on EBay with bids starting at $68,000. As my Scibling from Genetic Future writes, it's not clear what a purchaser gets for these prices beyond a hard drive full of A's, T's, G's and C's; but the idea of having your own genome sequence is still fun to think about.

Comparing the prices for Next Gen with the previous gen

Today, if we look at the prices we can find on the web and do a little math, we come up with these kinds of results for sequencing costs:

For 454 sequencing, laboratories charge about 20 cents per kb.

If I use the prices from CoFactor Genomics, sequencing with the Illumina GA II is the cheapest at 4 cents per kb.

(I couldn't find any prices advertised for the ABI SOLiD instrument, but given the amount of data produced, the cost is probably similar.)

What does this mean?

It's pretty clear from the cost comparisons and this year's publications, that Next Gen technologies are going to be used more and more and Sanger sequencing will be used less and less.

On other hand, if the science instructors aren't too attached to the wet lab and science classes want hands on practice with bioinformatics, they can get a bacterial genome sequence for under $5000 (or free if they win CoFactor Genomics' competition), and change their focus to digital biology. Maybe college biology students will put down their pipettes a little more often and work more with the data. 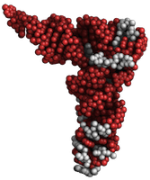