Last spring, in a coffee shop in Berkeley, I saw an amazing thing. It was a cup made from corn. The information on the cup says that it is made from corn, is environmentally sustainable, and 100% compostable. 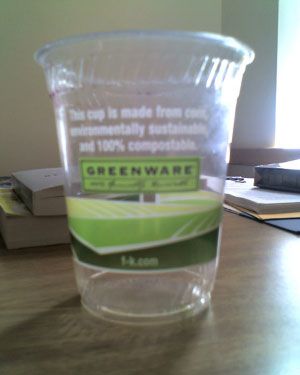 My fellow ScienceBloggers have written several articles lately about corn in fast food (here, here, and here), but I'm not sure they realized that corn is used for more than fast food.  Corn is also used to make the packaging.

The company that made this cup is called Fabri-Kal.  The cup is one of many compostable packaging items from Fabri-Kal's Greenware line.  Interestingly, although the cup says that it's made of corn, that point isn't so clear from Fabri-Kal's web site. 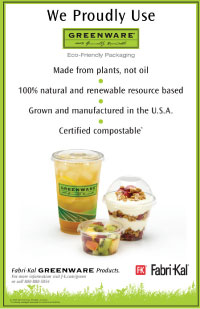 Fabri-Kal says that their serving containers are made with NatureWorks® biopolymer.

NatureWorks® biopolymer is a polylactic acid resin derived from plants.  According to NatureWorks, the company that makes the polymer:

The technology to produce NatureWorks biopolymer allows abundant, annually renewable resources like ordinary field corn to replace finite ones (petroleum) in everyday products, such as food packaging, bottles, disposable serviceware, labels and sheet. The technology to produce NatureWorksÂ® biopolymer essentially harvests the starch stored in natural plant sugars. The sugar is then fermented into lactic acid, which is used to create a clear plastic called polylactide (PLA) that can be shaped into a variety of innovative products such as bottles, containers, trays, film, packaging and fiber (branded as Ingeo™).

The polymer is used to make a surprising number of items including T-shirts, coffee cups, clothing, and socks!  And all these are made out of starch.  Starch is fermented to lactic acid (by some kind of microbe, I suppose), and the lactic acid is used to make clear plastics.  According to NatureWorks this process uses 62-68% less fossil fuel and reduces greenhouse gas emissions 80-90% compared to traditional plastics.

That all sounds pretty good, but I wonder how well this trade off between oil vs. corn really balances out in terms of the environment.